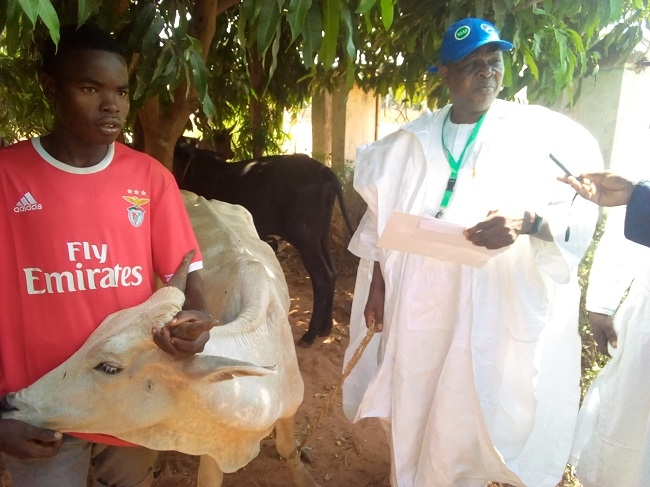 FOURTEEN Pastoralists in the Northeast have been empowered by the Federal Government to breed their cattle within their communities (ranching).

The programme which is through the Nigeria Institute of Animal Science, has Promex Multi-services Nigeria Limited as consultants that made the distribution.

Mr. Abiola Fola explained that the empowerment programme is aimed at encouraging the pastoralists to build their herds of cows by giving them heifers to breed, re-breed and produce more cows.

He said, “the animals we are giving them are young healthy female cows. They have been vaccinated to be able to stand in terms of health and other challenges.

“It is intended that they will be able to breed more of these animals, derive other byproducts from the animals, not only for the meat, milk, they can also breed other animals, enlarge their herds that they can sell”, he stressed.

According to him, they are going round the geopolitical zones and will “teach and guide them on the use of current technology in their animal breeding so as to get the best.

A lead paper presenter during the training, Dr. Babawuro Yahaya from the department of animal science, faculty of agriculture, Federal University of Kashere, Gombe State, praised the Federal Government’s efforts saying, “the FG feels there is need to waken our brothers, the herdsmen, so that this movement of cattle from north to south will be stopped”.

He said the programme is being tagged “ cattle husbandry practice” and is aimed at establishment of ranching.

According to him, the biggest ranch in Gombe State is the Wawazange, established to house over two million cattle but that due to encroachment and farming activities the land has now diminished.

He stated however that “the FG is putting more inputs so that we will settle those nomads from the Northeast part of the country in that particular place”.

He said pastoralists selected were mostly heads of families who will in turn narrate and even sell the ideas to others because the issue of going to south, always creating conflict between herders and farmers should be stopped.

State Commissioner for Agriculture and Animal Husbandry, Muhammad Magaji Gettado, who was represented by his Permanent Secretary, Barrister Obel Yaji, commended the FG for the programme.

While calling for peaceful coexistence between farmers and herders, he said the State Government alongside the Federal Government, have put in a number of facilities in Wawazange cattle ranch to encourage herders and cattle rearing not only in the Northeast zone but the whole of Nigeria.