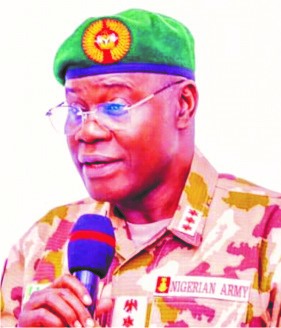 THE Nigerian Army (NA) and Nasarawa State University, Keffi (NSUK) have signed a Memorandum of Understanding (MoU) on Security and Strategic Studies Development.

This was contained in a statement signed by Brigedier General Onyema Nwachukwu, Director Army Public Relations.

While delivering his remarks, the Chief of Army Staff (COAS), Lieutenant General Faruk Yahaya, who was represented by the Chief of Training, (Army) Major General Abdulsalami Ibrahim lauded the Nigerian Army College of Logistics (NACOL) and NSUK for the academic collaboration.

He further added that both institutions would leverage on the MoU to pursue academic excellence.

Speaking during the event, the Commandant, NACOL, Maj Gen Martin Enendu said the  partnership would improve strategic studies and training of students of NACOL.

He added that the collaboration would spur the college to continue partnering with professional bodies towards achieving excellence in the field of studies.

Professor Saadatu added that the University is favourably disposed to organizing joint training programmes with the NA.

She also reiterated the willingness of the University to extend opportunities for academically qualified officers to teach courses that will add value to their programmes.