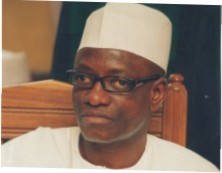 A former member of the House of Representatives for Karu, Keffi, and Kokona Federal constituency Hon. Ahmad Aliyu Wadada has said he is the most qualified to be elected as the senator to represent the Nasarawa West Senatorial Constituency based on his pedigree, political and legislative experiences.

Speaking during a valedictory fare well in honour of  Senator Abdullahi Adamu organized by  the All Progressives Congress (APC) in the Nasarawa West Senatorial zone in Keffi, Hon Wadada contended that since by virture of his experiences he is a thorough bred politician, he is the most qualified and competent person to succeed Senator Abdullahi Adamu.

“Given my pedigree, political and legislative experience without any doubt I remain the most qualified and competent person to occupy the position of the next senatorial seat against my two co-contestants who lack such experiences” he contended.

Wadada who expressed his satisfaction with the remarkable and encouraging support he is now enjoying across the constituency attributed such feat to the understanding of the people that he is most qualified to be in the red chambers this time around having served delightly in the green chambers .

Speaking about the celebrant, senator Abdullahi Adamu, the senatorial hopeful described him as a father who he has benefilted immensely from his wise counsels  and political direction.

He stated that even thorough in life there are situations whereby they may disagree but that is not within the purview of anybody to interfare or trespass.

While wishing him and all other persons of goodwill the best in their endeavours, he appealed to all and sundry to imbibe the spirit of peaceful co—existence, unity and harmony in order to build a dynamic and prosperous Nigeria for the betterment of all.

Also, a Senatorial aspirant for Nasarawa Western zone of Nasarawa State under the platform of the All Progressive Congress (APC) Barrister Labaran Shuaibu Magaji has pledged to continue to pursue his aspiration with high degree of decorum, maturity and sense of responsibility in order to maintain his popularity and acceptance by both the party and the people of the area.

Speaking during a valedictory meeting in honour of Senator Abdullahi Adamu for his recent election as the National Chairman organized by the Nasarawa Western zone of the party in Keffi, Barrister stated such has become highly imperative in order not  to overheat the polity or chase away his teeming supporters.

“My resolve to pursue my political aspiration with the a  high degree of decorum is  to ensure that everything is done decently and orderly in order not to throw away the baby with the bathing water,” he explained.

Magaji stated that even when he was going to obtain his nomination form he called his two co-contestants Hon. Ahmad Aliyu Wadada and Architect Shehu Tukur to notify them and seek for their prayers and blessings and he also did same when he was returning the form after completing all that is supposed to.

According to him, such attributes of responsibility is what is required to make the politics better and pledged to team- up with any one that emerges amongst them in the spirit of sportsmanship.

He therefore tasked his teeming supporters to exhibit a high  sense of decorum and responsibility in all their conducts as a means of attracting more supporters to his side to enable him grab the ticket of the party and win to represent the zone in the Senate.   On  the celebrant Senator Abdullahi Adamu, he described him as an experienced politician that has impacted and mentored many people to become responsible in both their political and personal lives.

Meanwhile, the former Nasarawa Western Zonal Chairman of the All Progressives Congress (APC) Alhaji Iyal Aliyu Hassan has attributed the remarkable success recorded by his outgoing administration to the demonstration of equity, fairness and justice to all irrespective of all their differences.

Speaking during the valedictory meeting in honour of Senator Abdullahi Adamu the current, National Chairman of the party, organized by the party in the area in Keffi, Iyal Hassan stated that he has succeeded in building an all-embracing party whereby all the party faithfuls and supporters were carried along and with a high sense of respect and justice.

“We have indeed succeeded in putting in place an all-embracing party machinery whereby all party supporters are carried along, treated justly and respect accorded to every one of them,” he stated.

Hassan who expressed delight that during his time the party is growing from strength to strength, urged his successor(s) to build upon where we stopped so as to consolidate on his achievements and even move forward.

He further expressed  happiness with the support and co-operation his leadership enjoyed from the supporters of the party and urged them to extend such spirit to the new officials to enable them succeed.

On  the contributions of the celebrant, Senator Abdullahi Adamu, the former Chairman described him as a true political father who has successfully crossed all the murky waters in the path of his political journies.

Hassan then wishes him the best and assured him of their continued support and loyalty to enable him succeed in the task of taking the APC to the next level.