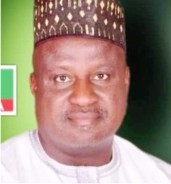 EXECUTIVE Chairman of Karu Local Government Area, Hon James Thomas has called on the APC stakeholders of Aso/Kodape electoral ward to be united.

He made this known during an extended meeting with the APC stakeholders and party officials of Aso Kodape ward, on Sunday.

The Executive Chairman said the reason behind meeting was to remind the party officials about the forthcoming primary and general elections, and the need to prepare fully for it.

Thank you greatly for the support and prayers you have been giving to us, and I appeal to you to remained peaceful and united, He said.

The Karu local government Chairman used the meeting to thank the Nasarawa State Governor, His Excellency, Engineer Abdullahi Sule for the appointment of illustrious sons of Aso/Kodape ward into his cabinet, the gesture which a Chairman said must be reciprocated.