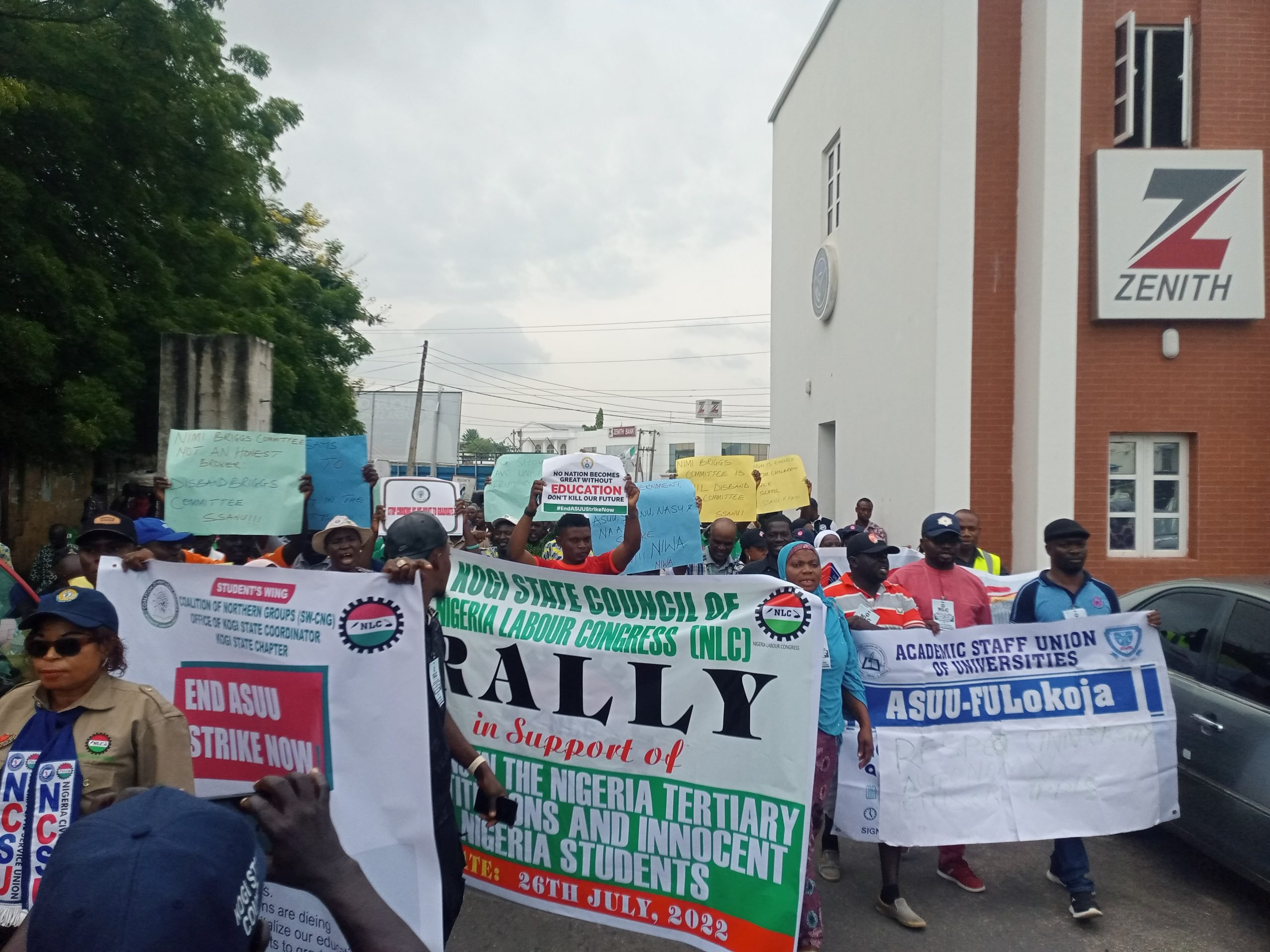 The Nigeria Labour Congress, (NLC) Kogi State Chapter on Tuesday, joined in nationwide protest over the prolonged strike action embarked upon by the Academic Staff Union of Universities, (ASUU).

Members of NLC who held a solidarity work from Stella Obasanjo Library to the Kogi State Government House in Lokoja presented their demands to Governor Bello for the strike action to be called off by the aggrieved lecturers.

Carrying placards with different inscriptions such as “Federal Government, conclude renegotiation with JAC, SSANU, NASU”, “Enough is enough! Get our children back to school”, “Respect University Autonomy”, “Jettison IPPIS”, “End ASUU strike now”, and many more, the Kogi State chairman of NLC comrade Onuh Edoka who was represented by his vice chairman, comrade Opaluwa Eleojo while presenting the demands of labour to Governor Yahaya Bello lamented on the negative effect of the strike in the county.

The union recalled that the aggrieved lecturers in the university decided to down tool on February 14th 2022 when the federal government deviated from the 2009 agreement with the university lecturers.

He maintained that relevant stakeholders have decided to wade into the matter but has not yielded any positive result.

According to him, the continuous stay at home by students in the university poses a great threat to the security and unity of Nigeria as a nation.

While calling on the Kogi State Government to intervene in the dispute between the ASUU and the federal government, the NLC chairman said it is disheartening that the Buhari led administration could withheld the salaries of the striking lecturers for over five months.

He also described the decision of the present administration to keep mute over the demands of the striking lecturers as wicked and insensitive.

Responding, the Kogi state Governor, Alhaji Yahaya Bello who was represented by his deputy Chief Edward Onoja said the faceoff between ASUU and the federal government is long overdue, adding that, for any nation that wants to succeed, priority must be given to education.

Governor Bello assured the labour leaders that his administration will put pressure on the federal government to put a lasting solution to strike action in Nigeria.