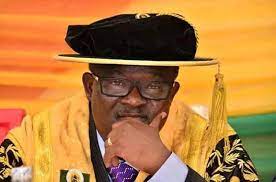 THE Taraba State University, Jalingo has produced a movie of international standard ahead of other universities in the country.

The Vice Chancellor of the University, Professor Vincent Ado Tenebe, disclosed this while playing host to the Big Brother Naija season Six star Sakoty Jonah known as Sasky and a Nollywood star Yemi BlacQ who were in Jalingo for the premiere of the movie produced by the students of the Department of Film and Theatre Studies of the university with the title: “Shades of Innocence”.

The celebrities were accompanied to campus by their fans on a long motorcade where they interfaced with the Vice Chancellor.

While addressing the actors and the students of the University, the VC told the gathering that the movie was supported by Governor Darius Ishaku whose priority is education, adding that the development of the youths is key to him.

”I welcome you to Taraba State, Nature’s gift to the nation. The movie that we are about to Premiere today, is a film produced by our students mainly as practical so that they will know the world they are going into and it’s done in conjunction with other film actors in the country to give a chance to the students as practical in their area of specialisation. And I make bold to say that the movie is of international standard, the movie is a huge success because our visitor, the Governor of the state, Arc. Darius Dickson Ishaku has been so supportive. He believes in the youths and has encouraged us to help the students discover their talents while they are in campus. With this movie now, everybody will know that we are actually among the 20 top  universities in this country. Our students of Film and Theatre Studies are worth their salt as film makers. I am proud of our students, that’s to say that their future is bright and secured. They must not wait for government or white collar jobs. So I congratulate our students for this great achievement,” Tenebe stated.

Also speaking, the Dean of Students Affairs, Dr. Rebeccah Daniel who is a guru in the field of film making, spoke in line with the film Director, Zacks Francis, who both threw their weights behind the Vice Chancellor affirmed that the story is of international standard, reiterating that Taraba State University is the first university in the whole of Nigeria to have produced a movie of that standard.

The premium took place at the gym hall of Jolly-Nyame Stadium Jalingo with top actors from Nollywood, Kannywood, staff, students of the university in attendance, as well as the Vice Chancellor, Prof. Vincent Ado Tenebe.