The legislature: 2020 in retrospect 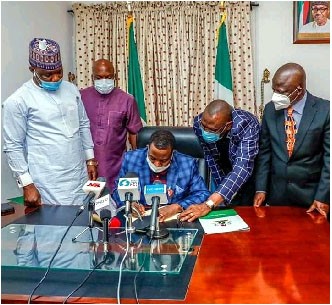 The year 2020 may have come and gone but will forever be remembered as one of the most challenging years in the history of mankind for very obvious reasons. Just like every other year,  it started on a rather promising note as many Nigerians looked forward to having a good year with better possibilities. Inspite of the glaring signs, people still had this positive outlook.

It is the beginning of another year and time to take a cursory look at events that shaped the past year. How has the legislature fared in the past year? There is no doubt that the 2020 legislative year witnessed its own fair share of ups and downs. It was a year of the good, the bad and the ugly. How was the relationship between the executive arm and the legislative arm?

The Ninth National Assembly under the leadership of Senator Ahmad Lawan one would say had a too cordial relationship with the President. The coming of the Senate President began with the setting up of two committees to according to it, strengthen the relationship between the two arms of government. Even though a step in the right direction, many say that the Senate President wielded his powers as presiding officer to offer full protection to the president and head of the executive arm, Muhammadu Buhari. He was accused of expeditiously complying to and approving several requests from the executive despite dissenting voices in some cases. Lawan was a few times, seen as defending the Buhari administration against public opinion.

In Plateau State, there were those who viewed the relationship between the executive and legislature as being too smooth and cosy for comfort. In as much as there exist a cordial and good working relationship between the Speaker Abok Ayuba and the Governor Simon Bako Lalong, it is believed that some happenings in the state seemed to suggest that the executive has its arm wrapped around the legislature, especially regarding the continued tenure extension for some local government caretaker chairmen in the state.

Sometime last year, yet another motion was moved by the state assembly for the extension of the tenure of the caretaker chairmen of Riyom, Jos North, Jos South and Barkin Ladi local government areas. The motion came after a letter was received from the executive governor Simon Lalong on the subject. Even though the PDP members rejected again the tenure extension, calling for elections to be conducted instead, the motion however scaled through as the majority APC members ensured so. This heightened rumours already sparked amongst citizens on the true motives behind the development.

One of the biggest challenges which the country was confronted with in 2020 is the Covid 19 pandemic. The pandemic did not only take the lives of many, it almost brought the economy to a standstill and eventually sent it into another phase of recession. The role played by the Nigerian legislature in trying to curb, curtail and contain the spread of the virus is to an extent, worthy of commendation. Several decisions were taken by the lawmakers on certain measures aimed at ensuring that the disease did not claim a lot of lives.

In the the state for instance, the legislators right from the onset of the pandemic embarked on massive and aggressive sensitization programmes, including enlightenment campaigns in the various constituencies and communities on the need for the people to always observe all the guidelines and safety protocols put in place by the government. Aside from this, they also went out of their way in donating a part of their May salaries to the Covid 19 State Trust Fund and made donations of materials like hand sanitizers, face masks etc to their constituents.

As legislators and representatives of the people, they have the responsibility of ensuring that their constituents stayed safe by obeying all rules issued by the state government and in order for them to be fully equipped to do so, members of the Plateau State House of Assembly as well as top management staff had to undergo a Covid 19 response training aimed at building their capacity on the pandemic and other critical related matters in October as the pandemic progressed. Also, a motion was moved on the need to  do a mass testing of all citizens and residents in the state. All these were geared towards protecting and safeguarding the lives of the people.

Another notable event which the country witnessed in 2020 that along with the Covid 19 pandemic contributed in destabilizing the economy was the #EndSARS protests. Even though the protests started on a good note, it ended on a very sad note as it was hijacked by some persons who saw an opportunity to create chaos on the one hand, and those who seized the opportunity to loot and damage properties of not just the government but that of private individuals as well.

Several interventions were made by the legislative arm to see that the Government responded to the demands of the protesters. Recall that some lawmakers even joined in the protests by lending their support and applauding the Nigerian youths for standing up for their rights. This was before the protest was hijacked. In Jos, the protesters who stormed the Plateau State House of Assembly on October 13, got the Speaker’s attention as he came out to address them. As the protests continued to spread, the House at its plenary of October 20 in a matter of urgent public importance had a motion moved to that effect.

The lawmakers in their various submissions agreed that a democratic setting such as Nigeria allowed for a peaceful protest where agrieved citizens can get their message passed across. All that transpired on the floor of the House that fateful day was the unanimous agreement on the genuiness of the agitations. They were however, quick to caution against anyone taking the law into their hands. Solutions were proffered on the need for urgent dialogue with the protesting youths. Members of the National Assembly, especially the leadership  also made an attempt to calm the situation even though it came rather too late.

Reviewing the activities of the legislative arm of government in the last year would not be complete without mentioning how they strived to perform their primary responsibility, including fulfilling promises made to their constituents. Topmost is the promise to make laws that are in the best interest of Nigeria and Nigerians. The lawmaking duty comes before any other legislative duty and one major way of achieving this is by sponsoring bills and motions. Most lawmakers take pride in the number of bills and motions sponsored during their tenure and many who desire re-election, use it as their campaign strategy.

Some senators were heard severally boasting of their achievements in 2020. It is pertinent to note that this achievements are not only measured by the number of bills sponsored but also by the quality of the bill. Members of the National Assembly in the past year have sponsored several bills and motions which have directly impacted the lives of Nigerians. Some of these bills have scaled through first and even second reading while some have been assented to and passed by the executive. The bills include electoral amendment bills, constitution amendment bills, social welfare and gender inclusion bills and bills that seek to create institutions and agencies etc.

However, some bills have been refered to as controversial by Nigerians because of their nature and the many controversies they generated in 2020. Some of these controversial bills have passed through first and second reading at the Senate, despite the outcry against them. For example, the Social Media Bill. Although introduced in 2019, the bill generated so much outcry and debate which lasted almost the whole of 2020. This controversial bill is said to be currently at the committee stage with the committee probably ready to present its report to the Senate for further consideration. Nigerians are eagerly waiting to see if it will finally be passed.

In like manner, members of the Plateau State House of Assembly contributed immensely to very rich debates that have characterised the present House. These debates in 2020, resulted from several motions on matters of urgent public importance, pending bills, state security, implementation of Government policies and most importantly the annual budget. Churning out bills that will better the lives of Plateau people have been of utmost importance to the lawmakers. Within the period of 2020, several bills have been presented that have scaled through first and even second reading.

One of such bills passed by the state assembly is the Anti-land grapping, kidnapping and cultism Bill signed into law on Thursday December 24, 2020 by the state Governor Simon Bako Lalong. Also signed into law same day, was the 2021 Appropriation Bill. Note that since 2019, the state government and the federal government have both deliberately maintained a January to December budget cycle which analysts applaud and believe should be sustained for effective budget implementation.

The need to put smiles on the faces of their different constituents was a big desire for members especially as the 2020 calender year drew to an end. Many of the legislators embarked on numerous empowerment and intervention programmes and initiatives. Some of the programmes and initiatives were in the areas of economic empowerment, community development, educational development and upliftment through the setting up of various scholarship schemes, health care outreaches and so many others. All these gesture by the lawmakers are geared towards uplifting the living standards and bettering the lives of the people who elected them into office as their representatives.