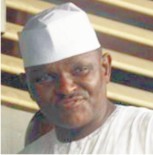 A political pressure group in Gombe, Northeast Nigeria, Hamza Almustapha Media Awareness (HALMA), has described the clamour for rotation of power to Southern Nigeria as a non issue for now.

According to the group, capability and capacity should be the watchword for Nigerians in choosing their next President in 2023.

Speaking during the group’s awareness campaign in Gombe over the weekend, Gombe State Chairman of the group, Mohammed Habib said, the group was clamouring for a better candidate who can deliver irrespective of zone, region, state, tribe or religion.

He said, “the issue of zoning is not what we want now, all we want now is somebody who is capable and has the capacity to lead Nigeria irrespective of zone, region, state, tribe, religion or whatever background.

” We are clamouring for a better candidate that can deliver and we believe former chief security officer to late Head of State, General Sani Abacha, that is, Major Hamza Austapha, is that person that can deliver”.

He said, Almustapha can take the country out of its current socioeconomic challenges especially in the area of security and economy.

According to him, Almustapha has a security background having controlled security not only in Nigeria but two other countries.

He revealed that, as the brain behind the establishment of Petroleum Trust Fund (PTF), Almustapha can revive the economy of the country for the better.

He said, “On economy, he was the brain behind PTF, and it helped a lot in terms of education, infrastructure, roads and many other areas that PTF was involved in”.