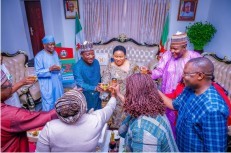 THE corridors of power was agog last week with drums  of celebrations to mark the birthday of Governor Simon Bako Lalong who clocked 59 on May 5th 2022.

It wasn’t a moment for lavish celebrations in view of the challenges being faced in the state and country but there was clinking of wine glasses to mark the day as his family members, close associates and  personal aides celebrated the ‘First Man’.

Good will messages from many notable dignatories including President Mohammadu Buhari, members of Parliament at the state and National levels, the Progressives Governors Forum, and other groups and individuals all wished the celebrant well describing him as a man with a strong desire for fostering peace and unity of the nation especially with his role as Chairman Northern Governors Forum and in his state.

Governor Lalong who said he was so humbled by the gesture appreciated God for the gift of life which he said is paramount to all the achievements he has done in his lifetime. He prayed for wisdom to continue to lead the state and nation in the many areas of assignment he finds himself.

He dedicated his birthday to the state praying for more peace and unity among citizens and more developmental strides to be recorded, and also to two young star-golfers who died in an accident while returning from a golf kitty at the Rhino Golf Course in Jos, shortly after the May 2022 Sallah.

As the Muslim Ummah rounded up their 2022 Ramadan fast, activities at Plateau Government House Little Rayfield heightened with an Iftar dinner and breaking of fast at the instance of the Governor.

The dinner tagged ‘Unity’ fast’ was held on Tuesday April 28, 2022 a few days to Sallah at the Banquet Hall, Government House Jos. Government played host to both Christians and Moslems for the breaking of fast. The dinner brought together both Christian and Moslem leaders at government circles, the traditional institutions, social and religious sectors.

This is not the first time Governor Lalong is spearheading such ventures where he uses as a platform  to advance his message on interreligious tolerance and need for peaceful living among different faiths. His peace strides is among the cardinal policy thrusts of his rescue administration.

Prof. Danladi Atu, the Secretary to the Government, said the welcome address at the fast-breaking-dinner saying the Iftar, which is at the instance of the governor, was solely a gesture to promote unity and peaceful coexistence among the citizens of Plateau State.

He said the Governor had tagged the meal ‘unity meal” that’s why the dinner was also used as a forum to invite guests cutting across different divides to partake in the significant gathering. He called for continued prayers for the state to keep it afloat to advance seeds of development.

The Governor, on his part, challenged all leaders and faithfuls of the two prominent faiths and  religions of Christianity and Islam to be practical about the teachings of their faith by showing love to others and living in peace.

Related Topics:Featured
Up Next